Morwell Club Bowls Club has become the first beneficiary of the Helping Hand Fund, developed by Bowls Australia (BA) in response to the COVID-19 pandemic.

Morwell Club, located in the Latrobe Valley area of Gippsland approximately 150km east of Melbourne, has been particularly hard hit by the effects of restricted trading, eradicating the ability to facilitate their usual bi-monthly raffles – a major source of revenue for the self-described ‘small club with minimal income’.

To make matters worse for the volunteer-driven club of 61 members, their locker-room/office was broken into and vandalised, with bowls equipment, umpire kits and their cherished defibrillator stolen.

With the club already feeling the pinch due to COVID-19, and seemingly unlikely to ever recover their potentially life-saving defibrillator, BA has come to the rescue, courtesy of the generous donations provided to the Helping Hand Fund by the bowls community.

BA is pleased to provide the club with a helping hand to the tune of $2765 to cover the cost of the replacement defibrillator device, in addition to the $1000 support already provided by the Victorian Government.

BA CEO Neil Dalrymple said he was pleased to be able to provide the relief on behalf of the entire bowls community.

“We know there are clubs that are doing it really tough at the moment, which is why we’ve established this fund in partnership with the Australian Sports Foundation and are calling on the wider bowls community to help contribute by donating to this important cause, if in a position to do so,” Dalrymple said.

“The Morwell Club Bowls Club is certainly one club that could use a bit of a helping hand to get back to a healthy position and it’s important that we provide this support to clubs quickly, when they need it most.”

“Our club was really feeling the effects of COVID-19, being unable to fundraise with our usual raffles or any other means of generating cash flow, but then to be the victim of a break-in and vandalism, resulting in the loss of a life-saving device among other things, was really disheartening and upsetting,” Broadbent said.

“On behalf of all members and patrons, we express our sincere thanks to BA and indeed all of the bowls community who have donated to the Helping Hand Fund.”

To date, the bowls community has contributed $8713 in donations to the Helping Hand Fund, with BA committed to redistributing these funds in its entirety to the clubs impacted most by COVID-19.

“On behalf of BA’s Board and staff, I wish to thank and acknowledge everyone who has donated to the Helping Hand Fund so far,” Dalrymple said.

“However, there’s still a long way to go to reaching the $150,000 objective to be able to provide meaningful support to the hardest hit bowls clubs nationwide that face daunting short-term viability issues relating to the impacts of COVID-19.” 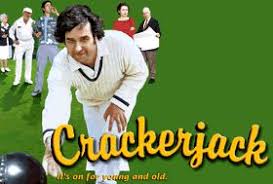 Comedian Mick Molloy says his classic lawn bowls film Crackerjack — made 20 years ago — is still a powerful commentary on the way older people are treated in Australia, as reported by Nui Te Koha in the Herald Sun.

Crackerjack, and other popular Australian films, will be celebrated in the fortnightly Victoria On Film series, launched last Saturday.

Molloy said he co-wrote the film after his eponymous Channel 9 show was axed in 1999.

“I was quite upset because I had a lot of people I had employed and I had nothing really to do,” he said.

Molloy and his brother Richard drew inspiration for their next move from a bowls club near their office.

“After the boom dropped at Channel 9, we were going, ‘What can we do?’ It dawned on us after a while we were sitting in it. We had a very clear dance card and an idea that maybe we could write a film about this bizarre little world.”

“I think (lawn bowling) is a particularly Australian pursuit. When we walked into a bowling club, you were stepping back into another age, where politeness mattered, where stories were told and passed on.”

“It’s about community, it’s about not judging people, it’s about all hands on deck and pulling together and specifically about the way we treat older people in this country. The film does make the point that you’ve got this great resource under your nose to learn and live from and help expand your own life and sometimes we just take it for granted.”

Today, Molloy is a broadcaster on Triple M and Channel 7. 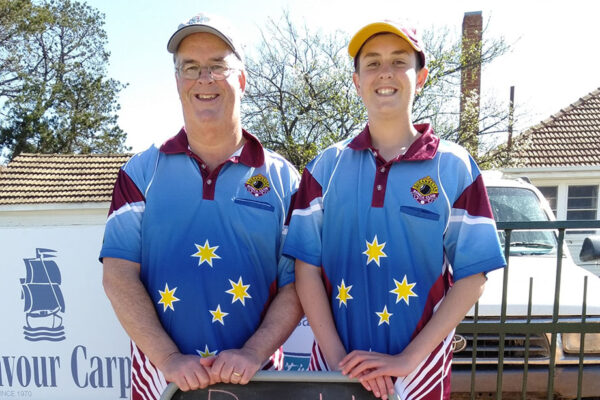 Father’s Day was extra special for Queanbeyan’s McAlister family this year, with Paul McAlister taking on son Harvey McAlister (14) in the final of the Queanbeyan Bowling Club minor singles on Sunday.

Both father and son picked up the game five years ago at a club open day, from there they have embraced the sport and been welcomed by club members.

Harvey, who was 9 when he started playing bowls, went in to the game with a quiet confidence after being involved with the ACT junior team and playing with the club’s grade 2 pennant side.

Paul, who plays in the club’s grade 5 side, said he just wanted to give his son a good game – and his Father’s Day wish came true.

In a close contest, the young buck edged out the old bull 25-22 to give Harvey his first club title.

Paul said he was very proud of his son and was just happy to have gotten close.

“Harvey was noticed straight away by club coaches Gordon Kelly and Margaret Davies at the open day who said he had wonderful ability,” he said.

“They didn’t say the same about me!”

“This is a great example of the new generations of bowlers and how it is a sport that can be played by everyone,” he said.

“Queanbeyan Bowling Club are welcoming of new players to come along and try the sport and are actively involved with local schools promoting the game to new generations.”

While both Paul and Harvey have been involved in other sports including cricket, rugby and AFL, it is bowls which the pair is setting their goals for heading into 2021.

Harvey is keen to continue to develop as a bowler and continue to play in elite competitions, while Paul said he is just keen to get redemption in the 2021 Minor Singles knowing at least he won’t have his son to worry about next year!